This article explores DJI’s massive investment in R&D, their supply chain model, and product evolution. We also examine the pricing of DJI’s drones. DJI has the advantage over American companies in several ways. First, it has its own manufacturing facilities in Shenzhen, China. This allows DJI engineers to develop and test prototypes in a nearby facility. Secondly, their partnerships with companies such as Apple and Sony give them an advantage over American companies.

While many companies have gotten into the consumer drone industry, DJI’s massive investment in R&E has set the company apart from the competition. The company is the world’s leading supplier of consumer drones and is widely credited with establishing the consumer drone industry. DJI’s products are incredibly high quality and have revolutionized aerial videography. Many customers have become word-of-mouth marketing machines, posting their videos to social media platforms and encouraging friends to buy DJI products.

The company’s aggressive investment in R&D has paid off in terms of sales and profits. The company has hired hundreds of engineers and thousands of employees to develop innovative drones. This investment has enabled the company to expand through several channels, including B2C and B2B sales outlets. As a result, DJI is able to release high-quality products at competitive prices. 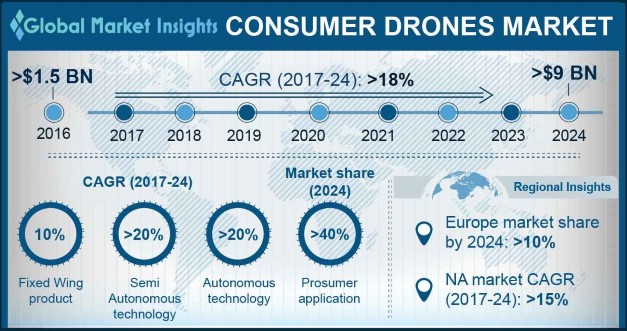 Frank Wang founded DJI in his dorm room while studying at the Hong Kong University of Science and Technology. After receiving an expensive remote-controlled model helicopter from his father, Wang decided to build a better controller. As part of his graduate thesis, Wang perfected the electronics flight controller that is a critical part of drone technology. Today, DJI holds over 70% of the consumer drone market. The company is a window into what is to come from China in the future.

The success of DJI is due in part to their supply chain model. In addition to manufacturing their products, they also sell them through distributors. By the end of 2018, they had over 100 US distribution partners and more than 200 worldwide. Currently, DJI has 69% of the global market and will generate over $180 million in 2020 from distributors.

While DJI is privately held and not publicly traded, it does have some major investors. In 2016, a government fund authorized by the Chinese State Council and SASAC invested in DJI. This fund is headed by Zhu Bixin. According to an article published on the fund’s website in October 2019, a deputy party secretary of the fund visited the company’s Shenzhen facility.

Its Mavic Pro and Phantom drones are popular choices for aerial photography. These drones represent about 36 percent of the market for $500-$1000 consumer drones in North America last year. However, they’re not dominant in lower price categories, where they’re mostly toys. Hundreds of companies compete in that segment.

DJI’s success has been due to its ability to integrate modular components and innovate around technology. This allows the company to meet the needs of their customers. The company continues to innovate around technology and its processes. Its focus on innovation and product evolution has allowed it to dominate the consumer drone market. DJI has also successfully positioned itself to serve the aerial photography and videography markets.

DJI’s pricing strategy has helped them take over the consumer drone market. They’ve continued to lower prices, even as competitors have increased their prices. In North America, DJI captures around 50 percent of the market in price ranges of $1,000 to $2,000, according to the company. However, DJI is not dominant in price ranges below $500, where most drones are toys. Instead, hundreds of companies compete for this market.

Mota, a San Jose, California-based electronics company, recently bought the Lily drone brand. The Lily drone company disappointed many of its backers on Kickstarter. The company surveyed 224 people about the drones they were interested in. They were presented with four different drones by different companies. The survey showed that eighty percent of respondents would purchase a drone from a U.S.-based company, while 51 percent plan to buy one in 2020.

DJI has worked hard to keep prices down and improve their technology. By investing in research and development, they are able to create high-quality products with affordable prices. They also release products frequently.